July 21, 8pm: Ukrainians went to the polls today to cast their ballots in the early parliamentary elections. The 29,783 polling stations in the country have now closed and vote counting is in progress. The last polling station abroad will close at 6am Kyiv-time in San Francisco on Monday, July 22. In the coming hours, election officials will be counting the votes cast and reporting polling station results to district election commissions (DECs). First, they will count the party list votes followed by votes cast for majoritarian candidates in the country’s 199 single-member constituencies. Overall, 29,538,361 voters were included in voter lists for this election in country as of the start of voting. Of these voters, 699,087 people opted to vote at their place of stay (homebound voting).

Some 567,000 voters were registered to vote abroad at Ukrainian embassies and consulates in 72 countries. Voters registered abroad as well as approximately 76 percent of the 280,922 voters who temporarily changed their place of voting (such as the internally displaced or other mobile populations) were only entitled to receive one ballot, the proportional ballot. This means that they were only able to vote for candidates on the party list in the nationwide constituency, and not able to vote for candidates in single-member constituencies. Polling stations abroad will report the results of voting directly to the Central Election Commission (CEC). 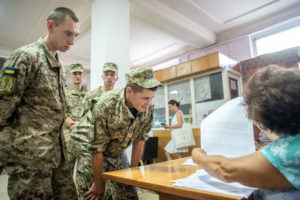 The CEC registered 22 party lists with 2,746 candidates for the nationwide election constituency, which will be allocated based on a proportional system. The CEC registered 3,084 candidates for single-member constituencies, of whom 1,680 ran as independents (self-nominated) with the rest nominated by political parties. Overall, 66 political parties fielded candidates for this election. Under the parallel electoral system used for parliamentary elections in Ukraine, half of the country’s 450 possible MPs are elected through a proportional system with the other half being elected in first-past-the-post single member constituencies. In this election, 225 MPs will be elected based on closed party lists in the proportional component of the elections with a five percent threshold for participation in seat distribution, while 199 MPs will be elected under a first-past-the-post electoral system in single-member constituencies in the majoritarian component. Twenty-six seats in parliament will be left vacant, since 26 of the 225 single-member constituencies are currently located in temporarily occupied territories where Ukrainian elections are not held.

Some 163 non-governmental organizations registered a total of 27,885 domestic observers. The CEC also accredited 1,719 official observers from 12 foreign countries and 21 international organizations. International observation missions from the Organization for Security and Co-operation in Europe (OSCE) Office for Democratic Institutions and Human Rights (ODIHR), the European Network of Election Monitoring Organizations (ENEMO) and CANADEM all deployed international short-term observers throughout Ukraine on election day.

According to preliminary reports by Ukrainian NGO Civil Network OPORA, isolated cases of irregularities occurred on election day during voting but they were not systematic and did not appear to have an impact on the outcome of the vote. Issues observed included voters being allowed to vote without presenting proper identification, violations of the secrecy of the vote and pre-signed but otherwise empty vote counting protocols. A few instances of voters taking photos of marked ballot papers were also reported by domestic observers.

In general, no major procedural violations were observed by domestic NGOs during voting. The scale of detected violations, according to OPORA, was low and similar to what was reported in the 2014 early parliamentary elections. OPORA is conducting a parallel vote tabulation (PVT) and will announce PVT results on July 22. 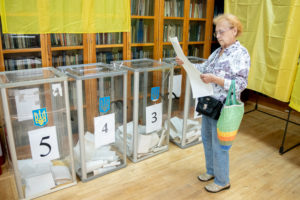 PECs are now hard at work counting votes and completing election results protocols. PECs will transfer two certified copies of the results protocols to the respective DECs for tabulation. DECs will verify and enter protocol data in the Vybory system and transfer preliminary results to the CEC electronically. Official results are to be announced by the CEC by August 5, 2019 after the CEC receives hard-copies of all results protocols. If there are cases of election disputes or recounts, the establishment and publication of the final election results could last until August 17, 2019.

The CEC will release preliminary results of the vote for party lists and for single-member constituency candidates on a dedicated page in Ukrainian, please find the link here.

On election day, the IFES Ukraine team was joined by representatives from international partners who provide support and funding to IFES’ program in Ukraine, visiting 16 polling stations in Kyiv during the opening of polls and throughout voting on election day.