This report is offered to the attention of all stakeholders – first and foremost the incoming parliament – but also the Central Election Commission, the Constitutional Court, the National Police and other electoral stakeholders.

This report represents IFES’ view on the lessons learned from the parliamentary electoral process and provides a catalogue of concrete recommendations to improve the legal and administrative framework for future elections. It should be read in conjunction with IFES’ “2019 Presidential Elections in Ukraine: Post-Election Report,” which can be accessed here. IFES’ post-election reports are informed by observation mission statements that have been published to date, summarized by IFES here, as well as IFES’ extensive analyses over its years of providing on-the-ground support to democratic progress in Ukraine.*

IFES’ latest post-election report concludes that the 2019 early parliamentary elections represented an important electoral milestone for consolidating democracy in Ukraine. While international and domestic observers evaluated the elections as being conducted in a manner generally consistent with democratic practice and in respect of fundamental freedoms, instances of fraud, malpractice, and manipulation through the exploitation of weaknesses in the legal framework were noted, largely during the campaign period. Contestants took advantage of loopholes in the legal framework and many did not comply with campaign rules or political finance regulations. Oversight with media and campaign finance lacked efficiency and allowed the circulation of shadow funding in the election campaign. The registration of “clone” candidates and misappropriation of names of well-known parties in order to disperse the votes of prominent contestants and mislead voters contributed to unlevel the playing field. 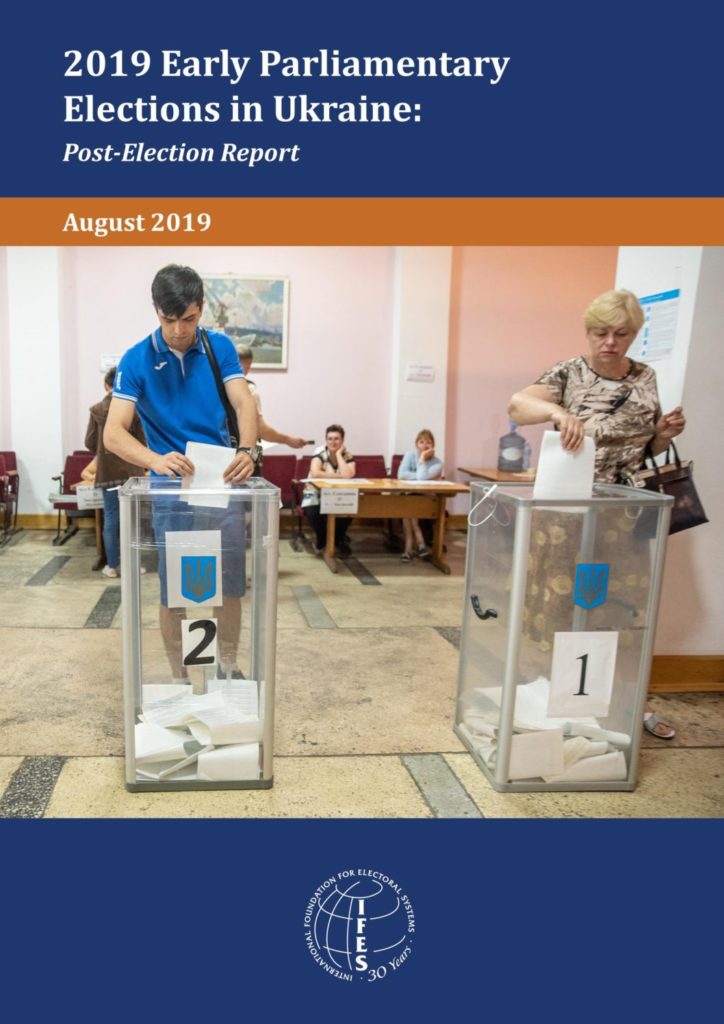 However, all observers stated that election day was administered in a generally professional and smooth manner across the country. The first-past-the-post (FPTP) component of the parallel electoral system again proved prone to fraud, with noted occurrences of abuse of administrative resources, vote buying, and illicit campaigning. Instances of malpractice were identified during counting and tabulation of votes in some single-member constituencies and resulted in a few District Election Commissions (notably no 50 and 210) being unable or unwilling to establish the outcome of the vote in the respective election district.

It is critical that election stakeholders now reflect seriously on the 2019 presidential and parliamentary elections to draw on lessons learned and consider observer recommendations. So far, only a few of the existing recommendations have been addressed. The legal framework governing national and local elections requires significant review to meet international standards and best practices for democratic elections. The last-minute passage of a new, unified election code by the outgoing Parliament does not necessarily address these flaws. Conflicting language and provisions must be removed from the laws, sanctions for misconduct strengthened and the highly centralized nature of the election administration reconsidered. Ukrainian elections could be made far more inclusive if lasting solutions are found to enfranchise voters, who currently need to undergo the cumbersome procedures for temporarily changing the place of voting without changing the electoral address, by making the election process more accessible to voters with disabilities or by introducing effective and enforceable measures towards better representation of women and national minorities in elected office, including in parliament.

Conversely, observers and electoral stakeholders also noted a number of significant improvements, including the better preparedness of the CEC and other authorities to combat cyber-attacks on key election infrastructure; a competitive campaign environment with respect for fundamental freedoms; lack of major instances of fraud during voting, more transparent vote counting and tabulation; the effective role of police in maintaining and protecting public order on election day; high-quality, wide-scale training of election commissioners provided with IFES technical assistance; and a significant increase in women’s representation in the new Rada from 11.6 percent to more than 20 percent.

The IFES Post-Election Report offers recommendations to improve future democratic processes in Ukraine. They appear in bold in the body text and are collated in an annex at the back of the report.

Later this month, IFES, together with Civil Network OPORA, will release a joint paper that will highlight key electoral reform priorities with the intention to summarize and operationalize existing and new recommendations for improving the electoral framework in Ukraine, with a focus on the next nationwide local elections expected in October 2020.