CEC Reports First-Round Election Results. On April 7, the Central Election Commission (CEC) reported final results of the March 31 presidential election and announced a second round of voting between the top two finishers – Volodymyr Zelenskyi and President Petro Poroshenko – on April 21.  The results confirmed a preliminary CEC tally on April 4 following electronic transfer of tabulated results from all polling stations in Ukraine.

According to the final results, Zelenskyi, representing the Servant of the People Party, won 30.24 percent of the vote followed by Poroshenko (independent, affiliated with Petro Poroshenko Bloc) with 15.95 percent.  Yuliya Tymoshenko, of the Batkivshchyna Party, was third with 13.4 percent of votes cast followed by Yuriy Boyko (independent, affiliated with the Opposition Platform “For Life”) with 11.67 percent and Anatolii Hrytsenko of the Civic Position Party with 6.91 percent of votes cast. According to the CEC, the number of invalid ballots amounted to 1.18 percent of all votes cast. 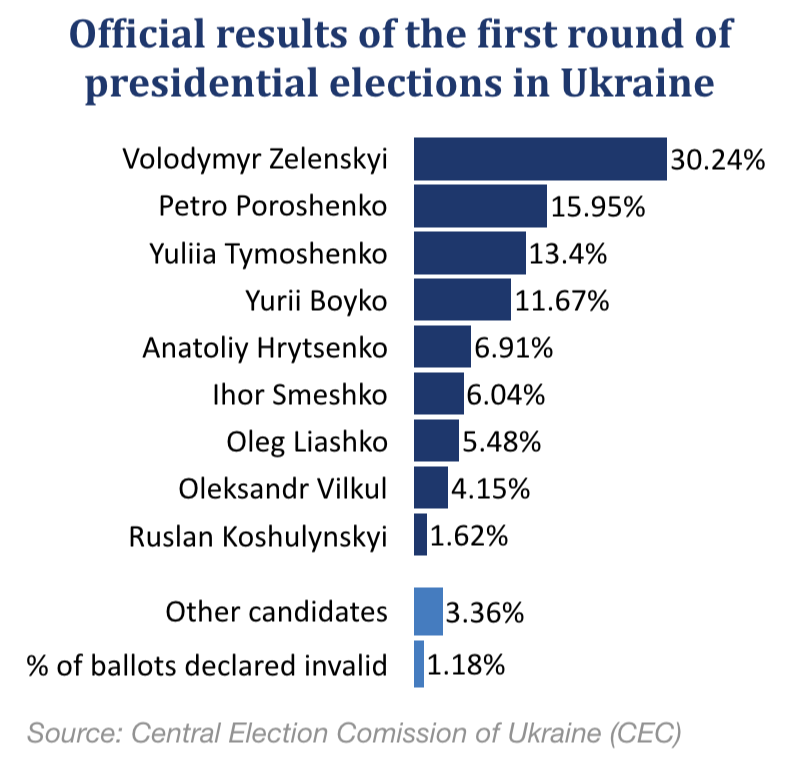 CEC results confirm a parallel vote tabulation (PVT) conducted by the leading domestic election observation group, Civic Network OPORA, on April 1. According to its PVT, Zelenskyi received 30.1 percent of votes cast, followed by Poroshenko at 15.7 percent and Tymoshenko with 13.3 percent. According to OPORA, the number of invalid ballots amounted to 1.3 percent of all votes. Tymoshenko announced she would not challenge the first-round results and will focus on preparing for the October parliamentary elections.

Latest Opinion Polls Ahead of the Second Round of 2019 Presidential Election. According to an opinion poll published by the “Rating” Sociological Group on April 11, 61 percent of the voters who intend to participate in the second round will support Zelenskyi, while only 24 percent will support Poroshenko. Some 15 percent of respondents who will vote in the run-offs remain undecided. The poll was conducted after the first-round results were announced, between April 5-10 among 3,000 respondents with an error margin of 1.8 percent.

The same research indicated that 82 percent of the respondents stated that they had not personally encountered cases of vote buying in the presidential election. On the other hand, 17 percent said they had either experienced it personally or heard about such facts from relatives and friends.

The level of distrust in the government in general and the election administration in particular remains high with 39 percent of the respondents indicating they expect significant election fraud in the second round of the election. Simultaneously, 37 percent believe that cases of fraud will be insignificant, and only 14 percent do not expect any election fraud at all. The greatest number of those who do expect significant falsifications was recorded among the residents of the South and East of the country.

International Election Observers Weigh In. The first round of the 2019 presidential election was administered without large-scale violations, according to international observers.  The Organization for Security and Co-operation in Europe (OSCE) Office for Democratic Institutions and Human Rights (ODIHR) Election Observation Mission (EOM) in its Statement of Preliminary Findings and Conclusions noted that the presidential election was competitive, voters had a broad choice and they turned out in significant numbers.

OSCE/ODIHR observers, however, noted that “in the pre-electoral period the law was often not implemented in good faith by many stakeholders, which negatively impacted the trust in the election administration, enforcement of campaign finance rules, and the effectiveness of election dispute resolution.” Overall, however, fundamental freedoms were generally respected, observers noted. These sentiments were echoed in the conclusions of other international EOMs including the European Network of Election Monitoring Organizations, CANADEM and the Ukrainian World Congress.

EOMs from the National Democratic Institute and the International Republican Institute issued preliminary statements addressing immediate and long-term challenges for inclusive and credible elections in Ukraine. IRI recommended allocating enough human resources to voter register maintenance bodies to facilitate voter requests for change of voting addresses before the April 21 runoff as well as administering policy debates between Zelenskyi and Poroshenko in advance of the April election day. Long-term recommendations include improved voter accessibility to the electoral process, enhanced CEC transparency and introducing dissuasive, effective, and proportionate sanctions for violations of election laws.

Assessment of Domestic Election Observers. In its report, Civic Network OPORA noted isolated incidents and electoral violations, including citizens allowed to vote without showing proper identification; voters photographing their marked ballot (which could be evidence of vote buying), precinct election commissions (PECs) opening before 7:15 a.m. and restricting observer presence in the polling station. Overall, Civic Network OPORA, concluded the March 31 election occurred in a competitive environment and in accordance with international standards. Isolated cases of electoral violations were not an obstacle for citizens to exercise their voting rights.

According to the conclusions of the Committee of Voters of Ukraine (CVU) based on their election day observation report, the election was generally in accordance with requirements of national law and international standards. Compared to the 2014 presidential election, the nature of the violations did not significantly change.  CVU observers identified frequent replacements of lower-level election commissioners and negative campaigning as issues and violations during voting and in the pre-election period.  However, these issues did not affect the election outcome.

National Police Continues to Address Electoral Complaints.  The National Police reported that it received 2,960 electoral complaints on March 31 and April 1. The police have launched 71 criminal investigations and drawn up 50 administrative protocols to document administrative offenses. The largest number of complaints have been filed in Dnipro oblast (356), the city of Kyiv (317) and Donetsk oblast (264).  Most alleged illegal campaigning and photographing marked ballots.  Photos of marked ballots might be a sign of a violation of secrecy of the vote, or part of a vote buying or carousel voting scheme.  Under Article 159 of the Criminal Code, such violations of the secrecy of vote are punishable by up to three years in prison.

Police received 61 complaints of vote buying.  With investigation of complaints ongoing, the police’s role on election day generally received positive feedback from both domestic and international election observation missions.  Before the second-round vote on April 21, the Ministry of Interior and the National Police should produce clear guidance to police officers on how to document election-related administrative offenses.  OPORA noted police officers faced challenges while compiling and documenting administrative offenses during the campaign last month. Effective investigations and sentences imposed by courts would be a further sign that authorities are resolving to hold election violators accountable.

Television Debates Before the Second Round.  Article 62 of the Presidential Election Law envisaged debates between the two presidential candidates competing in the second round.  The debates will be funded from the state budget and broadcast live on April 19, between 7:00 p.m. and 10:00 p.m. with at least 60 minutes of uninterrupted broadcast time. If one of the candidates refuses to participate in the debates, the entire broadcast slot will be given to the other candidate. Additional debates can be scheduled if they are funded by the candidates’ election funds

Following the first-round vote, Poroshenko invited Zelenskyi to participate in debates.  Zelenskyi agreed; but he challenged Poroshenko to conduct the debates at the Olympic Stadium in Kyiv which has a capacity of 70,050 spectators.
The President stated that both candidates should undergo medical tests to assure that “no alcoholics or drug addicts are among the presidential candidates”.  On April 4, Poroshenko publicly agreed to Zelenksyi’s conditions. Both candidates passed the drug and alcohol test on April 5. It remains unclear whether debates will be held on Sunday April 14 as suggested by Poroshenko or take the form of legally-mandated, government-funded debate on April 19.  There is still a possibility that there will be no debates if Zelenskyi refuses to participate.

President Poroshenko Meets Civil Society Representatives.  In an April 6 meeting at the president’s office, President Poroshenko supported rebooting of the Specialized Anti-Corruption Prosecutor’s Office and the National Agency for the Prevention of Corruption.  He also expressed support for the National Anti-Corruption Bureau of Ukraine (NABU), according to Darya Kalenyuk, Executive Director of the Anti-Corruption Action Center who was present at the meeting.  Kalenyuk also noted that the President agreed to release the Security Service of Ukraine from its obligation to investigate economic crimes.

“The President supports the NABU Director Artem Sytnyk, although he has some concerns regarding the overall performance of the Bureau”, said Kalenyuk. “Poroshenko stressed that he has never interfered in NABU operation” and promised that “the Anti-corruption judges will be appointed by the president in the next few days”. Ukraine is still in the process of establishing the High Anti-Corruption Court. The law governing its establishment was signed by the President in June 2018.

Civil Society Advocates for Adopting the Draft Election Code.  On April 9, activists and representatives of civil society organizations signed a public statement calling for the Verkhovna Rada to approve draft Election Code No 3112-1 in the second reading. The legislation introduces full proportional elections for parliament by eliminating the first-past-the-post element of the current parallel election system for parliament.  The Rada adopted the draft Election Code in the first reading on November 7, 2017.  Following its adoption, MPs proposed almost 4,400 amendments to the bill, which were subsequently considered by a working group established under the Committee on Legal Policy and the Judiciary of Parliament.  Consideration of all the amendments concluded last month. Civil society signatories urged the Committee on Legal Policy and the Judiciary to preliminarily approve the draft Election Code with amendments proposed by the Working Group. They  called on the Speaker of the Verkhovna Rada to include the draft Election Code in the parliament’s second reading agenda and to both consider and adopt it into law.

The Council of Europe’s Venice Commission Code of Good Practice in Electoral Matters promotes stability of election law and recommends that no significant changes to election laws – such as to the overall electoral system or constituency boundary delimitation – be introduced later than one year prior to an election. Late adoption of new election legislation – a few months before the October 2019 parliamentary elections – may leave insufficient time for the election administration to properly implement the new procedures envisaged in the Code including on vote counting and tabulation; election redistricting; and election campaigning and may have the effect of confusing voters about the applicable procedures.

Roundtable for IDP Electoral Rights.  On March 27, IFES civil society partner Group of Influence organized a round table to mark the second anniversary of the introduction of Draft Law No 6240 in the Verkhovna Rada. The event provided an opportunity for participants – including representatives of the State Voter Register – to analyze and draw lessons from registering a temporary change of voting address for participation in the March 31 presidential election. Some 325,725 Ukrainian voters experienced this procedure.  During the last week of voter registration, long lines developed in front of several register management bodies (RMBs) and potential voters were often discouraged and left. Those without a registered electoral address (which is often the case for a young first-time voters who are internally displaced) were sometimes provided humiliating advice to go and register as homeless at a shelter for homeless as a precondition for voter registration.  Some roundtable participants called the current registration policy discriminatory, especially towards internally displaced persons, who do not have access to an alternative registration process but must register to vote for each election.

Roundtable participants acknowledged that the short window available for registration prior to the April 21 presidential runoffs will potentially disenfranchise large groups of voters.  RMBs will not be able to process the same amount of applications as in the first round during the significantly shorter registration period (eight days for the runoff as opposed to 85 days for the first round).  This is yet another argument for Ukrainian lawmakers to adopt draft law Number 6240 and halt the current discriminatory policy towards the country’s displaced population.